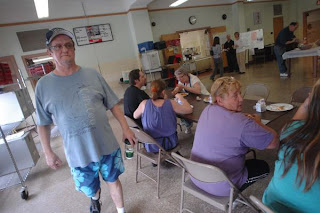 'Soup guy' has big heart
By David J. Hill The Tonawanda News
TOWN OF TONAWANDA — Every week for nine years, Don Horan has given a few hours of his time to Ken-Ton Meals on Wheels, where he’s known around the kitchen as “the soup guy.”Like many of his Meals on Wheels colleagues, Horan’s story extends far beyond the simplicity of making kettles of soup for clients’ weekend meals. And if it weren’t for a heart transplant nearly a decade ago, Horan likely wouldn’t be able to share his story.
Nine years ago this month, Horan was preparing to leave Strong Memorial Hospital in Rochester, where he had undergone three days of testing to determine whether he would need a new heart. “My doctor said, ‘You’re not going anywhere. Your heart’s too weak,’” Horan recalls.He was placed on a waiting list for a heart transplant and told that it could take anywhere from a couple of weeks to several months to find a matching donor.
Horan recounts what happened moments later: “I had just ripped open the silverware package on my dinner tray when the nurse walked in and said, ‘The doctor will be in in a moment.’ He came in and told my wife to take a seat. We thought it was going to be bad news. He said, ‘We found a heart for you,’ and six hours later I was in for surgery. I was very lucky. I was the fastest one they’ve ever had.”
At a hospital that has performed more than 80 heart transplants since its Transplantation Program began in February 2001, Horan was No. 5.A few months after the surgery, Horan, who as 49 at the time, said he was feeling a little down. After having worked a steady job for 30 years, Horan had to leave in the wake of his surgery. “I would sit down sometimes and wonder why I went through all of this. I told my wife, ‘I don’t know if I’m going to make it.’ I was taking 40 pills a day. It was hard,” he said, adding that his wife Sandra, who works at HSBC Bank, helped him through those tough times. “If it wasn’t for her, I wouldn’t be here,” he said.
At the suggestion of his landlady’s mother-in-law, who worked at Meals on Wheels, Horan decided to give it a try and started the January after his transplant. The experience has helped enrich his life.“I’m glad I went through all this. I have a lot to live for now,” he said. Volunteering at Meals on Wheels has given him a sense of accomplishment. “It gives me the feeling that I went through all of this for a reason, for a purpose.”Ken-Ton Meals on Wheels Director Amanda Crotty said Horan’s story speaks volumes about the organization. “It’s a telling thing about the organization, that people come here to give but they also get,” Crotty said. “Everybody here’s got a story. He stands out and yet he’s incredibly typical.”After starting out volunteering three or four days a week, Horan has cut down his schedule to spend more time watching his four grandchildren. Horan’s efforts at Meals on Wheels enabled the agency to include soups in its weekend meals. Horan comes in early in the week and makes the soups, which are then frozen until they are ready to be delivered on Fridays.
Thanks to his new heart, Horan hopes to be able to deliver on a goal he established immediately after receiving the transplant. “I’d love to stay alive to see my grandchildren graduate from high school,” he said.Horan also hopes to use his success story to shed light on organ donation. “One person can save so many lives,” he said. “It changed the quality of my life. If it wasn’t for organ donation, I wouldn’t have a chance.”But because of that, Horan said there’s no reason he won’t be able to proudly watch his grandchildren accept their diplomas in a few years.“I feel really good,” he said.