April 7 is Green Shirt Day – Do you have yours? 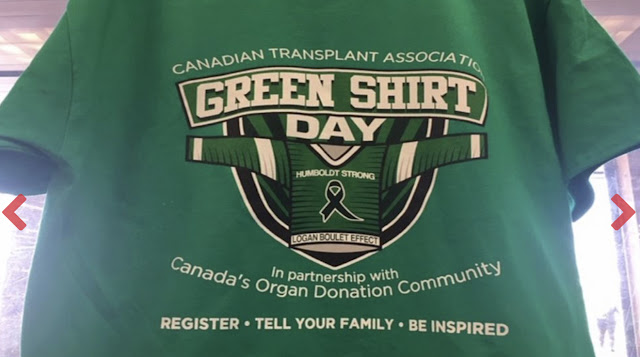 LETHBRDGE -- There are just two weeks before “Green Shirt Day”. If you still have to purchase your T-shirt, Save-On-Foods makes it easy. Both the North and West side outlets are selling the shirts for $15 at Customer Service, with all proceeds going to the Canadian Transplant Association.

On April 6, 2018, Logan Boulet was one of the 16 people killed when the Broncos team bus collided with a semi-truck. On March 1, Boulet’s family announced Green Shirt Day will be launched on Sunday April 7, 2019, in conjunction with the Canadian Transplant Association and Canadian Blood Services. It’s dedicated to promoting organ donation awareness while honouring the Logan Boulet Effect that saw countless numbers of people across Canada and the United States become organ donors, in honour of Logan, who had signed his organ donation card a short time before his death. Continue reading
Canadian Blood Services Canadian Transpoamt Association Green Shirt Day Organ Donation Awareness